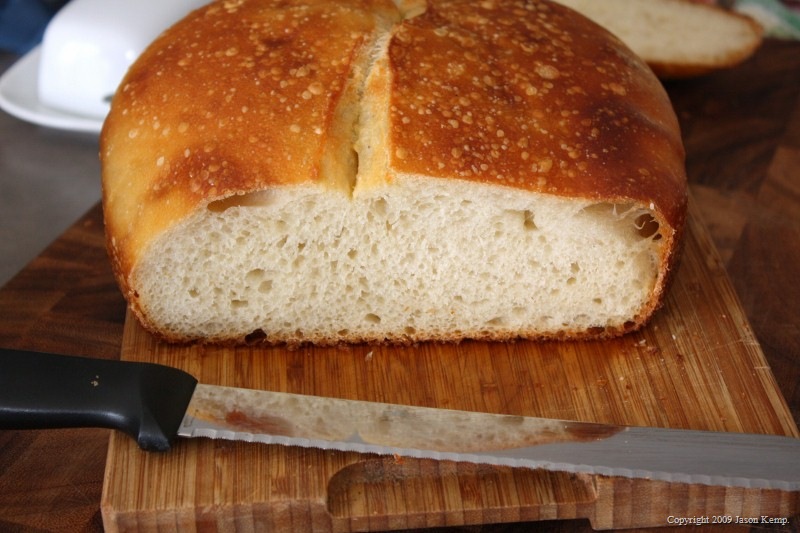 Aw, yeah! Tonight is the night we make sweet, weekly bread. You know how I know, baby?

But bread? Any time, any place. From dark, sour rye breads to gooey white bread, focaccia and ciabatta, baguettes, boules and buns: if it’s made from flour and yeast, I love to eat it.

So it’s no surprise that I would start making my own once I caught this cooking bug; it just seemed a natural progression. 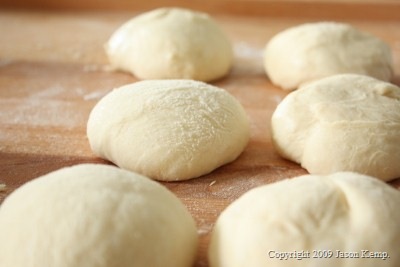 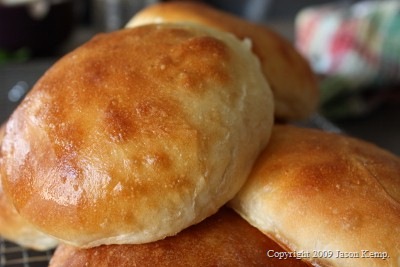 Cook enough chicken breasts, you can cook any chicken breast in any pan on any stove; eventually only the quality of the chicken will distinguish one from another. Bread’s not like that.

The same oven, the same bag of flour will produce different loaves from one day to the next. Bread depends on so much: temperature while rising, how much air gets out when you punch it down, the heat of the oven, how much moisture is in the oven for the first 30 seconds and on and on. And all with, ultimately, three ingredients: flour, water and yeast. It’s a hacker’s paradise.

Over the past 10 weeks, on Wednesday evening, I bake bread. Lately, I’ve been doing buns for burgers as well. Before I started cooking, I didn’t really taste my food; I certainly didn’t appreciate what was in it. Cooking has changed that. When you eat your own bread, you notice so much more about it. Even eating toast becomes something exquisite.

I had started experimenting last summer with focaccia bread and pizza dough, but it wasn’t really consistent. One batch wouldn’t be as good as the last, even though I followed all the steps. It wasn’t until I picked up Ratio: The Simple Codes Behind the Craft of Everyday Cooking

by Michael Ruhlman. That’s when things clicked for all kinds of baked goods. Have you ever wondered why 3 cups of flour, say, for a cake, and not 3.5 or 4? I did. Cooking isn’t fun when you’re tied to a cookbook. What Ruhlman’s book does is free you from ever having to look up a recipe for bread, pasta, cake or pie dough again, plus more. Once you know the ratio, you can begin experimenting with additional ingredients or changes to the ratio; by then, it’s not magic, but it’s kind of a secret (so don’t tell anyone about it; just bask in the compliments). 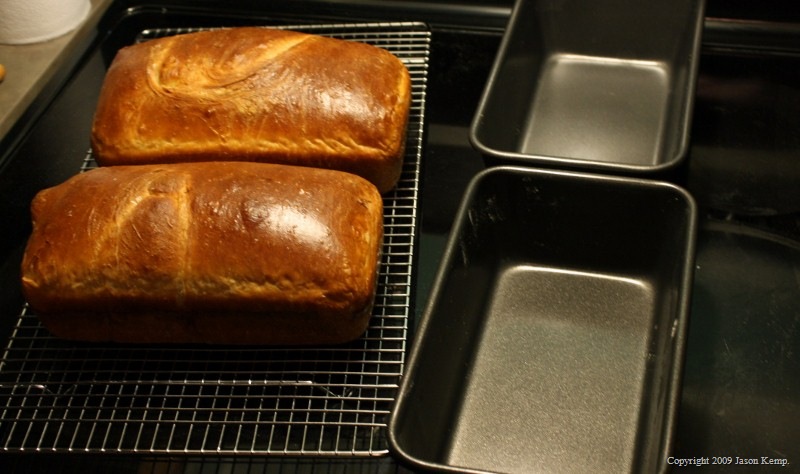 The ratio for bread is 5 parts flour to 3 parts water, by weight. I have a food scale from my – extremely short – days of precisely weighing all my food. Who knew I’d need it again? A scale is definitely something for the geeky home cook to possess. The following is a great technique for baking bread and mostly foolproof once you know your oven.

Mix the ingredients until they come together (I use a stand mixer, but you can mix by hand in a bowl). Knead the dough, about 10 minutes, until a handful of dough can be stretched without breaking and you can see a light source through it – a standard test for dough, called the window pane test.

Carefully take the dough out of the bowl on to a floured surface. Shape into a boule and place in a dutch oven. You can now put the dutch oven in the fridge overnight or wait an hour and bake it. If you put it in the fridge, take it out for around an hour. 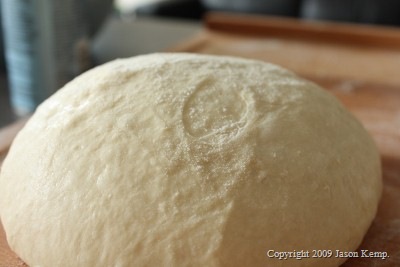 Why the dutch oven? Professional bake ovens introduce steam in the first 30 seconds of baking to accommodate the final rise of the bread before the heat kills the yeast. Keeping the surface of the bread wet allows the bread to expand. The dutch oven does the best job of that in a home oven. It uses the escaping moisture of the bread itself to keep the surface moist. What you get is a delicious chewy crust. 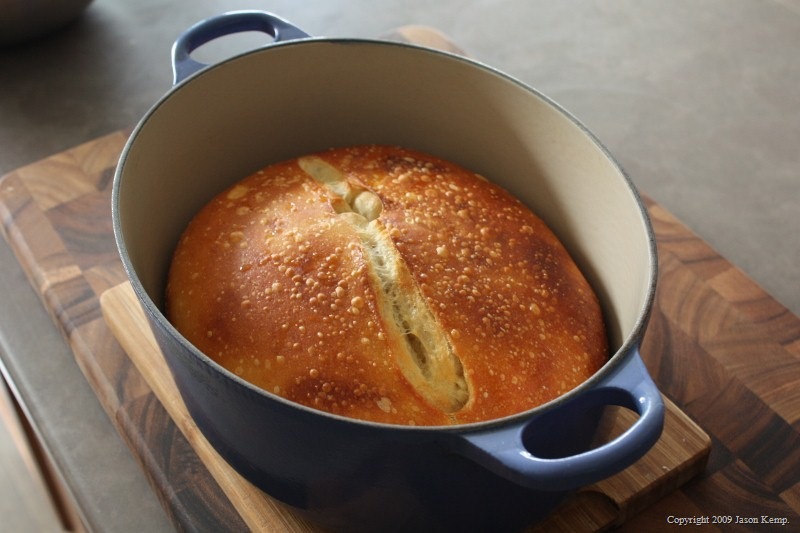 Chili in a Bread Bowl

Jason Kemp is a geek trapped in a cool guy's body. He hand crafts software for the web and mobile devices. He excels at user interface design, the deadlift and barbecue. He is @ageektrapped across the internet.